Frank was born in Chicago, Illinois, on Sept. 23, 1941, to Patrick and Ruth (Curda) Flanagan. On Dec. 10, 1966, in Michigan City, Indiana, he married Sandra Bartels, who preceded him in death on Sept. 9, 1997. Surviving are one son, Patrick (Holly) Flanagan of Lynnwood, Washington; sisters, Ruth (Vince) Runfola of Danville, California, and Helen (Jeff) Harold of Antioch, Illinois; and grandchildren, Noah and Olivia Simorjay of Lynnwood, Washington. He was preceded in death by his parents; brother, Patrick; and sister, Mary.

Frank graduated from Bishop Noll Institute in Gary, Indiana, in 1959, and the University of Notre Dame in 1963 with a communications degree. Frank then served in the Air Force from 1964 to 1968, stationed in Samsun, Turkey, and Fort Meade, Maryland.

After his time in the service, he entered radio, starting as a news and sports broadcaster for WLOI-AM in La Porte, Indiana. Frank made Michigan City, Indiana, his longtime home as news director for WIMS-AM during the early to mid 1970s. He then started his human resources career as human resources manager for Joy Manufacturing and PSW Industries in Michigan City, and Foamex in La Porte. He retired in 2012 after serving as human resources manager for the St. Joseph County Airport Authority, South Bend, Indiana, for 10-plus years.

Frank enjoyed all sports, Notre Dame Football and Basketball (men’s and women’s) were his favorites. Other must watch teams were the Chicago Bears and White Sox, but not the Cubs. He also loved movies (favorites were “The Quiet Man,” “High Noon,” and Flash Gordon serials), fictional detective/crime TV shows, concerts and golf.

Frank was a longtime member of and Lector for Queen of All Saints Catholic Church. He also loved participating in Michigan City Exchange Club meetings and activities, and enjoyed volunteering with Meals on Wheels in his retirement.

The family will be holding a private celebration of life at a later date. In place of flowers, please make a donation in Frank’s memory to Center For Hospice Care at cfhcare.org.

She was preceded in death by her parents; children, Jennifer, Michael and Teresa Kellems; granddaughter, Patricia Shinn; five sisters; and three brothers.

Patricia worked as a manager for WorkOne for more than 35 years. She was a member of the Moose Lodge and Casa Family Court. Patricia was the chairman of the class reunion. She enjoyed organizing and attending the annual family Christmas party and the family reunion at Fox Park. It would be common to have 200 family members at these events. Patricia enjoyed going to wineries, casinos, traveling, putting together jigsaw puzzles, and especially playing dominos and cards with her friends and family.

A Celebration of Life Memorial Service will take place at 5 p.m. on Friday, Jan. 21, 2022, at Cutler Funeral Home and Cremation Center.

Visitation will take place from 3 p.m. until the time of the service on Friday at the funeral home.

Memorial contributions may be directed to the family c/o Victoria Sutton, 2900 Monroe Street, La Porte, IN, 46350, or to the donor’s choice.

Condolences may be shared online at www.cutlercares.com.

Ann was born May 25, 1930, in Chicago the daughter of Albert and Karolina (Plany) Lestinsky.

Ann was an active member of Holy Family Parish, St. Peter Church and the Our Lady of Snows Circle.

Memorial contributions may be made to Holy Family Parish, c/o Our Lady of Snows Circle, 201 Bach Street, La Porte, Indiana, 46350.

Please share prayers, condolences and memories with the family at EsslingFuneralHome.com.

Florene (Rank) Troyer was born on Feb. 22, 1937, in Michigan City, Indiana, the daughter of Florence and George Rank. Mrs. Troyer graduated from St. Mary’s High School in Michigan City in 1954, and was valedictorian of her class. After graduation, she chose St. Mary of the Woods College in Terre Haute, Indiana, to begin her training for a career in teaching. Mrs. Troyer began her professional career at Elston Junior High School in 1958, as an English and social studies teacher. She began working on a master’s degree in counseling at Purdue University in 1959, completed the program in 1962, and was then appointed as a counselor at Elston High School. In 1963 she became the head of the counseling department at Elston High School.

She met her future husband, John Troyer, in 1960, shortly after he began his education career at Elston Junior High and they were married in June of 1963. Mrs. Troyer’s passion, as a counselor, was to help her students prepare themselves for a college career.

Mrs. Troyer was recognized in 1984, by Purdue University, as one of the most outstanding high school counselors in the state of Indiana. She also, after retirement, was recognized by the Michigan City Area Schools as a member of the Wall of Fame, where she joined her husband, John and John’s father, Russell Troyer, making three Troyer family members on the Wall of Fame. She was a member of the Delta Kappa Gamma sorority and, during her retirement, worked on the Michigan City Salvation Army Board for 20 years. She loved gardening, antiquing, making crafts and traveling with her husband. She enjoyed spending time with her educator friends as part of the “Lunch Bunch.” She will be missed by many.

He was born May 29, 1933, in the district of Mielec, Poland. Fr. Janeczek was ordained a priest on April 19, 1959. He arrived in the Diocese of Gary, and took up residence as an assistant pastor, first at St. Stanislaus in East Chicago, then at St. Stanislaus in Michigan City. In 1974, he became pastor at St. John Canty in Rolling Prairie. Then in 1977, became pastor of St. John Cantius in East Chicago, where he served for 15 years. His third pastorate came at St. Casimir Parish in 1992, where he remained for 12 years, until his retirement in 2004. After his retirement, he continued to assist at St. Casimir Church with Masses and funerals. Fr. Janeczek celebrated his 60th Jubilee of Ordination in 2019.

In lieu of flowers, Memorial Contributions to St. Casimir Church would be appreciated.

On Dec. 4, 1965, in La Porte, Indiana, he married Cheryl Denise Bunton, who preceded him in death on Aug. 10, 2021. Surviving are his children, Matthew (Karol) Meyers of Dripping Springs, Texas, and Melanie (Sam) Beer of Decatur, Indiana; and seven grandchildren, Kora, Kyler, Jax and Jorie Meyers, and Hannah, Becca and Jordyn Beer.

He was preceded by his parents and wife.

Bill farmed for approximately 30 years before becoming a professional truck driver until his retirement.

He had a passion for traveling, mostly in the continental 48 states, and also Canada, Sweden, Italy and the Congo. He loved gardening and processing plant seeds for seed companies.

A Celebration of Life Service will be held at 10 a.m. on Friday, Jan. 21, 2022, at Cutler Funeral Home and Cremation Center with Pastor Dan Lute officiating. Burial will follow at Oak Grove Cemetery.

Condolences may be shared with the family on www.cutlercares.com. 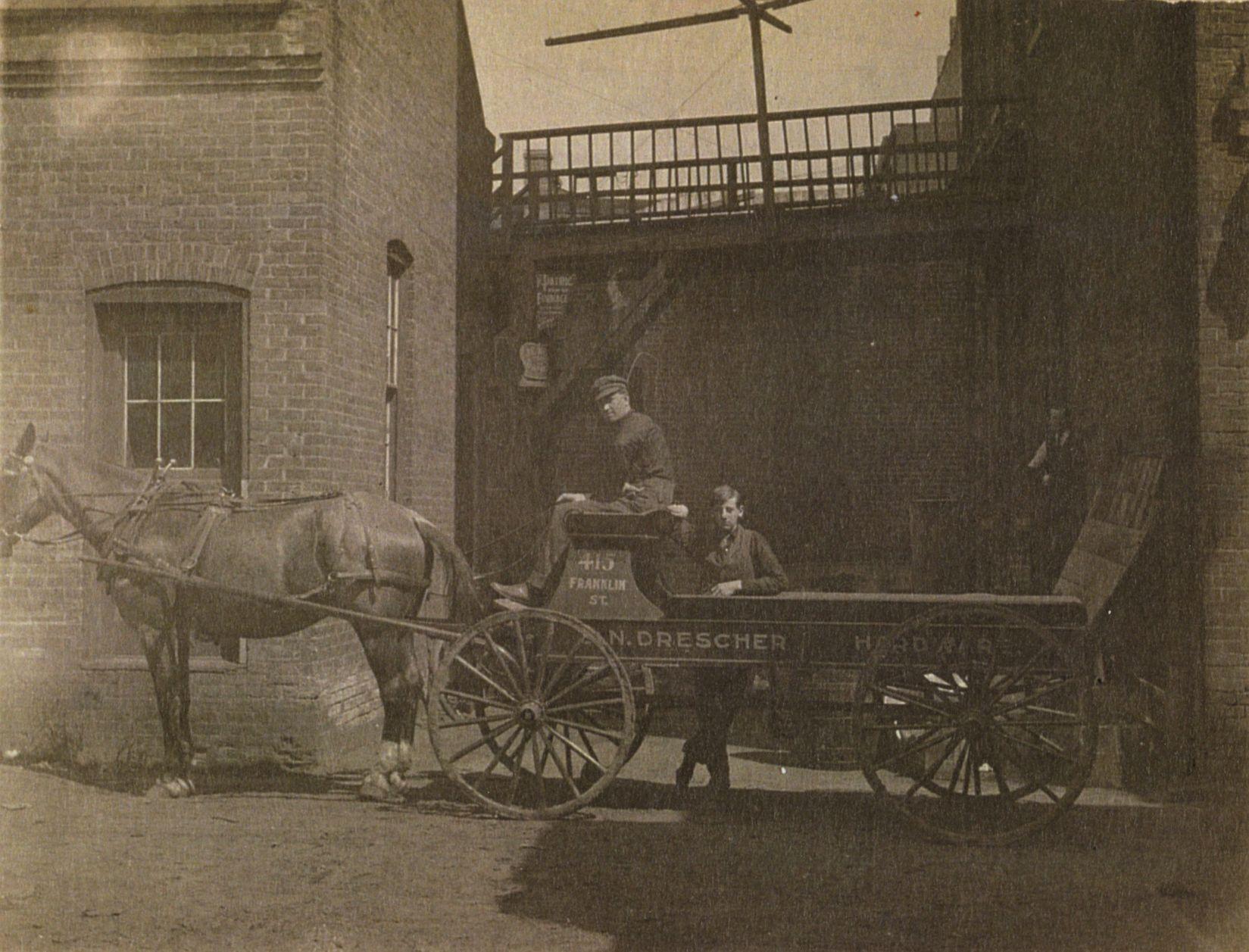 In this photo, Charlie Hulling and the Krueger boys are hanging out at the Coolspring Rolling Mills at Waterford, circa 1915. The carriage belongs to Drescher Hardware at 415 Franklin St.