Naomi worked as a switchboard operator until her retirement. She enjoyed sewing, baking and cooking in her spare time. Naomi was a thoughtful person who loved to help others. She will be greatly missed by her family and friends.

Preceding in death were her parents, George King and Emma Kaley; two sisters, Lucille Tyskie and Alberta Engle; and one nephew, Robert Tyskie.

A funeral celebrating her life will be held at 11 a.m., Wednesday, Oct. 6, 2021, at Lakeview Funeral Home, 247 W. Johnson Rd., La Porte, 219-362-3100, with Minister Jac Sallade officiating. Visitation will be held from 10 a.m. until time of service at the funeral home. Burial will follow the service at Pine Lake Cemetery, La Porte.

Please send condolences to the family at www.LakeviewFHC.com.

Gary Fred Huskey, 75, of La Porte went to heaven with his Lord and Savior at 1:55 a.m. Friday, Oct. 1, 2021, in his home surrounded by his family. Those of us who have accepted Christ as our personal Lord and Savior said, “So Long” to him, not “Good-Bye.”

Gary honorably served his country in the United States Air Force. He had a deep love for his family and his country.

Preceding in death were his parents.

Please send condolences to the family at www.LakeviewFHC.com.

In lieu of flowers, memorial contributions may be directed to Dunes Hospice, 4711 Evans Ave., Valparaiso, 46383, in memory of Gary Fred Huskey.

Local
Love's Travel Stop planning to build on U.S. 421, just south of I-94 near Michigan City
Photo by Jeff Mayes

A Love’s Travel Stop is planned for the northwest corner (top right) of U.S. 421 and CR-300N, just south of I-94 and Michigan City. Plans are for the gas station, store and truck maintenance shop to open in 2022.

Aerial map shows the intersection of U.S. 421 and CR-300N, just south of I-94 n Coolspring Township. A Love’s Travel stop is planned for the northwest corner (top left), while Harley-Davidson of Michigan City is at the southwest corner, and Bosak Chevrolet Buick GMC is at the northeast corner.

La PORTE — The intersection of U.S. 421 and CR-300N could be getting a lot busier as plans to build a Love’s Travel Stop just south of Michigan City are moving forward.

Love’s project manager Frank Ille told the La Porte County Board of Commissioners in September that they hope to have the store built and operating in 2022.

“We’re really excited about this project – that’s pretty clear by how long we’ve been pursuing it. A lot of different obstacles have come up,” Ille said.

The board accepted the La Porte County Plan Commission’s recommendation to approve the planned unit development at its Sept. 15 meeting. The site of the proposed travel plaza is on the northwest corner of U.S. 421 and CR-300N, just north of Harley-Davidson of Michigan City and existing Speedway plaza.

“You people are the most patient people I have ever had to deal with,” board president Rich Mrozinski said.

David Teyber, project manager with CESO Inc., explained that they initially brought the planned unit development to the board last fall.

“We had some issues with the gas line, had to make some adjustments to the site plan, had to change the plat a little bit. The general idea is the project is very similar to what we proposed the last time,” Teyber said.

County attorney Shaw Friedman said that none of the delays in the project are attributable to Love’s or the county.

“This has been attributable to the issues with the pipeline owner. The county economic team has been working very close with Love’s to help make this happen,” Friedman said.

“All of you, I know, agree about the economic impact of this project. I think everyone’s enthused about the fact that with the additional TIF dollars there, it will help in the water and sewer project as you go south of I-94,” he added.

The development, said Teyber, will be done in two phases, with Love’s being primarily phase one.

The Oklahoma City-based company has 600 sites nationwide and builds about 40 to 50 facilities a year, he said.

Plans for the store along U.S. 421 include Chester’s Chicken, Godfather’s Pizza, Taco John’s and a Speedco Tire Shop for light maintenance truck repair.

“The site will have separate areas for trucks to fill and park overnight, and a separate area for automobiles to fill up and go inside for snacks and beverages,” Teyber said.

For the second phase of the development, the land is being retained by the seller.

“They do have some long-term plans for potentially some warehouses or a hotel. That is being held by them and any construction would be on their terms,” Teyber said.

Access, he said, is identical to what they presented a year ago.

Commissioner Sheila Matias asked if Love’s has a standard building plan they use.

“The building will be a brick façade all the way around – usually a red brick. The Speedco Tire Shop is a metal façade. As far as landscaping and signage, we do have as part of the PUD a high-rise sign that will be placed out by the interstate,” Teyber said.

He added that there will be signage near the main intersection at U.S. 421 and CR-300N, and the site will also have landscaping on three sides where there is a public road.

The project, said Teyber, will also have some infrastructure and utility upgrades to help plan for phase two.

The county is also pursuing a water and sewer extension project at U.S. 421 and CR-300N.

“Ideally, we would synchronize the Love’s construction, so they get completed around the same time,” Teyber said.

“The time limit on the bid had expired. We did vote to move ahead to re-bid that. We’re in communications with the bidders. We don’t want this thing held up any longer than what it has been,” Mrozinski said.

Bids for that project will be received and opened on Oct. 27. 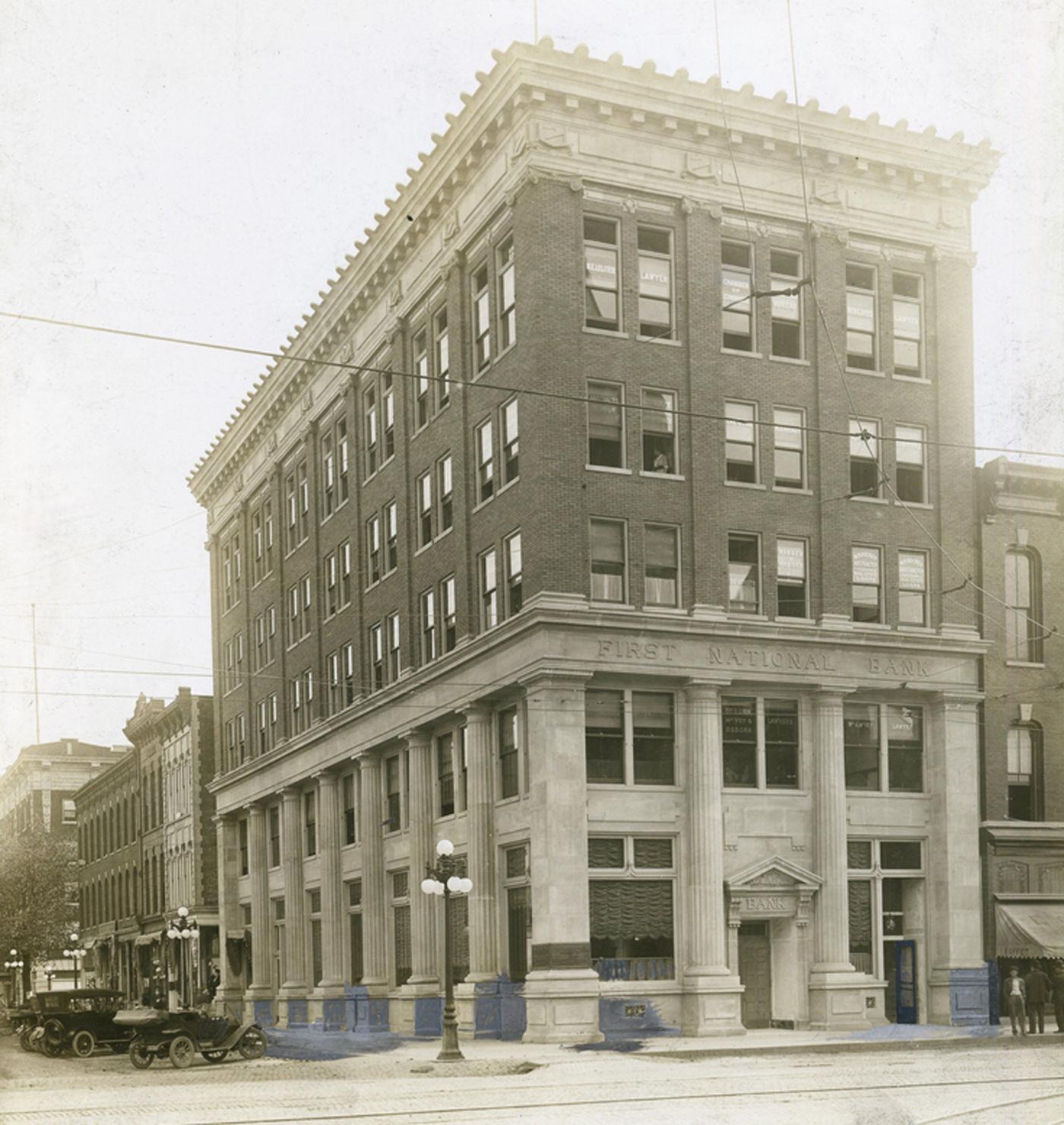 One year after a competing bank, The People’s Bank, remodeled its storefront into an imposing structure, the First National Bank moved down the street and erected this five-story Greek temple-inspired blockbuster. It remained this way from 1913 through 1975 when the exterior was modernized. Stone cut from the exterior during renovations eventually lined the banks of Clear Lake.

Irene Claire Brinkman, 87, of Union Pier, Michigan, passed away at her home surrounded by her loving family on Wednesday, Sept. 22, 2021.

Irene was born in Cleveland, Ohio, on Dec. 6, 1933, to the late Margaret and Albert Youdell. She was a graduate of Kirtland High School in 1951 in Kirtland, Ohio.

Irene worked at The News-Dispatch, where she met her husband, and at Phillips Drill as a secretary. She married Richard Brinkman on Dec. 20, 1952, in Michigan City, Indiana. They resided in Michigan City until 1968, and then had a home built in Union Pier, where they enjoyed spending their retirement years.

After their move to Union Pier, she became a secretary and later a business manager at the New Buffalo Area Schools for the next 28 years.

Besides her career, Irene was also very involved in her community. She was an active member of the New Buffalo Service League for 40 years. She was very proud of the annual Craft Show and giving scholarships to New Buffalo students.

She also was on the Miss New Buffalo and Blossomtime committees, MARSP organization, Pine Grove Cemetery Board, Pokagon Fund board and the Timberlane Shores Board of Directors, frequently with leadership roles as a president, secretary or treasurer.

She also supervised the township and school board elections. During her free time, she enjoyed gardening with flowers and vegetables, spending time with her two grandsons, working during holidays at a local florist and helping with Blessings in a Backpack.

Irene was preceded in death by her husband, Richard; sister, Winnie (Bob) Spratt; and her grandson, Jeffrey Adamec.

She is survived by her daughter, Cynthia (Arthur) Adamec of Gladwin; grandson, Justin (Mary) Adamec of Grand Rapids; sister, Dot Gallion of Michigan City; and many nieces and nephews.

In lieu of flowers, the family suggests that those planning an expression of sympathy may consider Meals on Wheels of Southwest Michigan, or Caring Circle of Spectrum Health Lakeland.