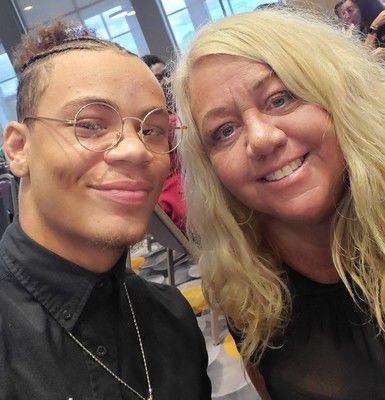 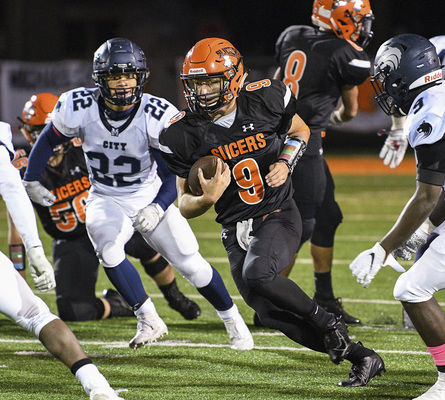 Photo by Robb QuinnMichigan City's Nate Ware (No. 22) looks to tackle La Porte's Collin Bergquist in a game on October 11 at Kiwanis Field.

Photo by Robb QuinnMichigan City's Nate Ware (No. 22) looks to tackle La Porte's Collin Bergquist in a game on October 11 at Kiwanis Field.

An impact player for Michigan City on the football field, Nate Ware is a difference-maker outside of his helmet and shoulder pads, too.

Ware credits his mom, Sky Eckwood, for being his motivation, teaching him at a young age the importance of character, while shaping him into the person he is.

He was in sixth grade, living in Crawfordsville at the time, when he first felt a sense of obligation to do his part.

"It was the first year I played football," Ware said. "The community knew every player. I felt I had a responsibility to uphold."

That sentiment has remained.

"He's just a guy you like to be around and have around," M.C. defensive coordinator Roy Richards said. "He's real polite. Whenever my wife comes by, he comes over and hugs her. He was close to those quality kids we had last year. He's a leader, a guy whose presence is important. He's a quarterback out there on defense. He's one of those kids who you'll miss the personality when he leaves as much as the player."

That's saying something, given the impact Ware's had for City the last two seasons.

"He's a guy who when he graduates, you have to replace a linebacker, a special teams guy, a weight room guy, an academic guy," Richards said. "Our kids play well together, they communicate, they feed off each other, and a lot of that is Nate. We have guys like Rob Jefferson and Tony Conley who are great players, but they're so quiet, they don't generate the same energy. He makes a bunch of plays and his playmaking spurs a lot of energy."

While undersized for a linebacker at 5-foot-9, the sturdy 195-pounder prides himself on his football IQ.

"I've always been a hype guy," Ware said. "I make up for my size by knowing football, knowing the plays before they happen and what I have to do. I credit coach (Phil) Mason, all the coaches, for molding me into the player I am."

In September, Ware was chosen by high school teacher Kelly Martin-Fargo to represent the school at a Racial Equality and Inclusion symposium by Purdue Northwest-Westville.

"I selected Nate because he represents the best of Michigan City Area Schools, he represents why I do this," Martin-Fargo said. "He has not had an easy life, and yet, he is an eternal optimist. I love that child. What I love about him is he's real. Nate sees the truth in life, and moves himself forward. Nate represents hope for me."

Ware was selected to read from Rev. Patrick O'Neill's piece, "How Are The Children?"

"It meant a lot to represent my school," he said. "It was an incredible honor. I put a lot of effort into school. Academics means a lot. No matter how talented I am on the field, academics is what is going to get me somewhere in life."

Indianapolis, Olivet, St. Xavier and Marian have all expressed interest in Ware, who hopes to find a football fit to go with his educational interests. He plans to major in Biology and become a dentist.

"As a kid, my teeth weren't what I wanted," he said. "It affected me a lot, the way I smiled, the way I spoke. I'd like to be able to help kids who have that problem."

Previously a wrestler, Ware will run track in the spring in an effort to build his speed for college football.

"He's undersized for a linebacker and a little slow to play safety," Richards said. "I told him, 'Go where you want to go to school and if they let you play, cool. Don't go to school just to play, then you're chasing your tail.'"

While City (4-5) hasn't had the season it or Ware had envisioned, they both look for a fresh start as they open sectional play tonight with La Porte.

"We've definitely faced adversity, but our goals haven't changed," Ware said. "We want to go far in the playoffs, but we'll take it week to week, starting with La Porte. It's my senior year, it's getting to the end, I want to appreciate the time I have left. I definitely try to embrace every second."